The average respiratory rate of a healthy adult at rest is 12-18 breaths per minute. The rate increases while exercising. If the exercise is intense, it may increase to 40–50 breaths per minute, according to this source. 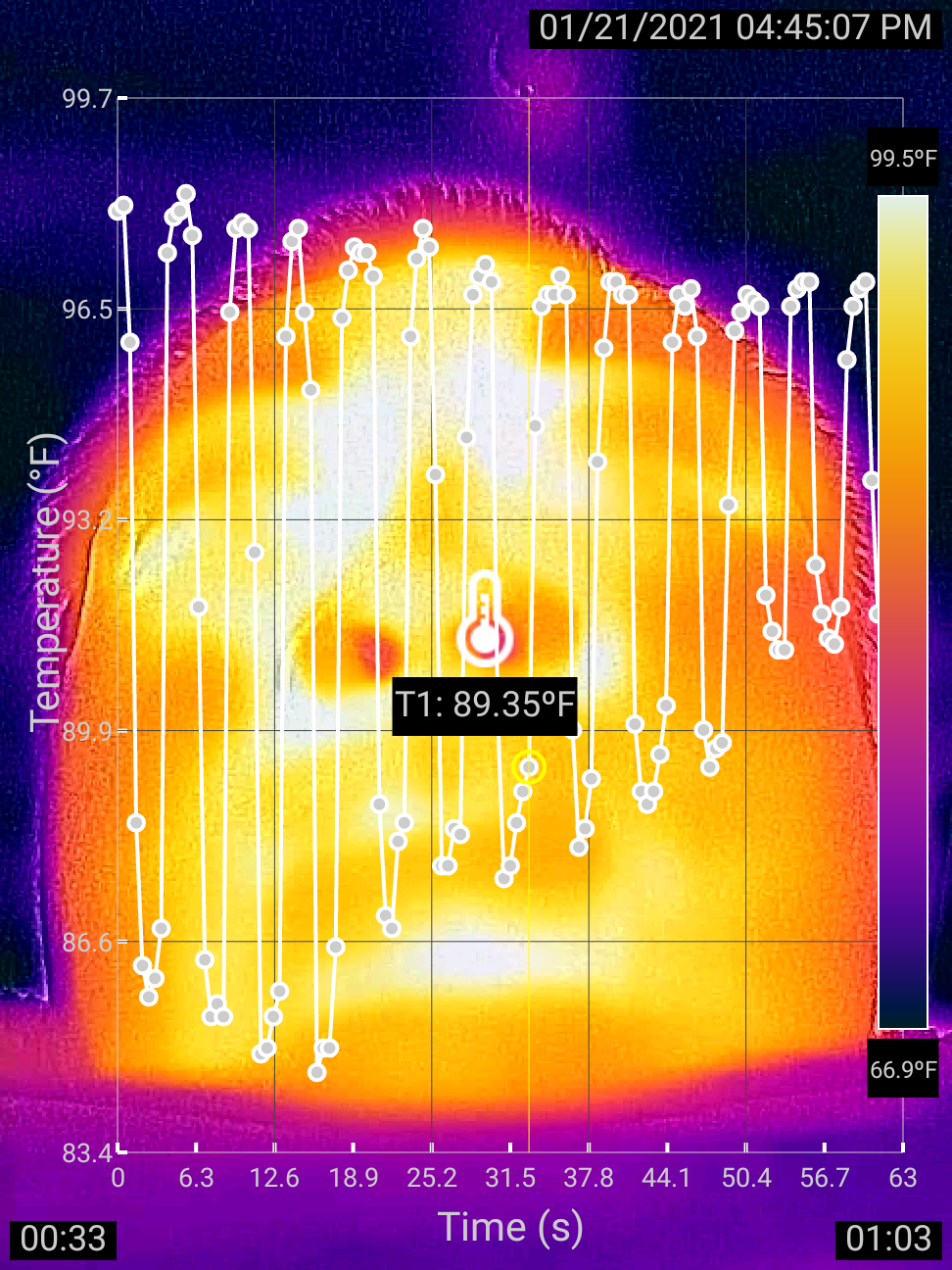 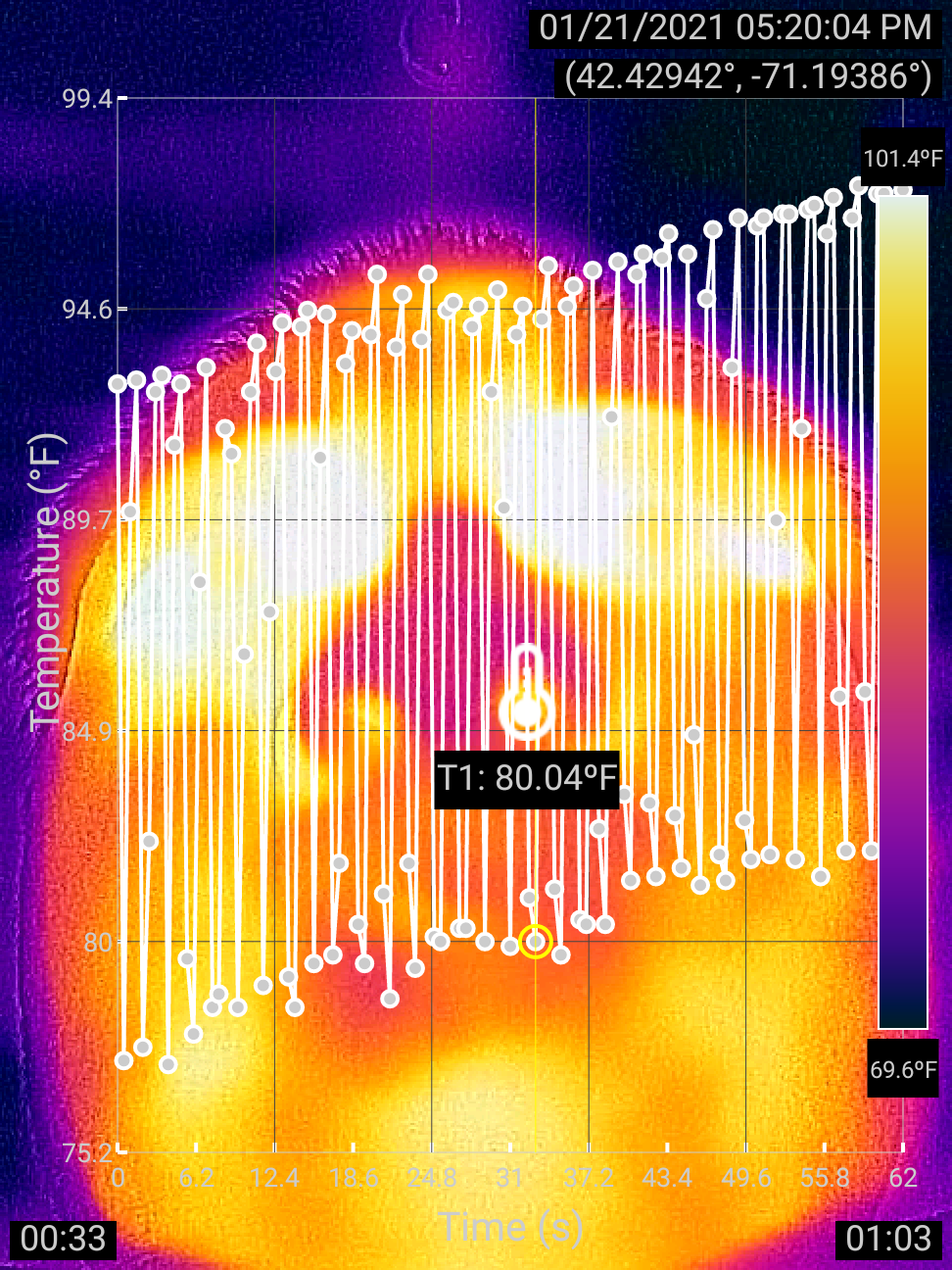 Comparison of the nostril temperature fluctuation of an adult before and after exercise. Image credit: Xudong Huang


The thermal images show more information beyond the rates. For further inquiry, we are interested in examining whether the temperature cycles of two nostrils were synchronized and had comparable amplitudes of fluctuation (if not, the person under observation might have nasal congestion). Since we have recorded the observations using the Infrared Explorer, we can easily add another thermometer and generate a new graph for comparison, shown as follows: 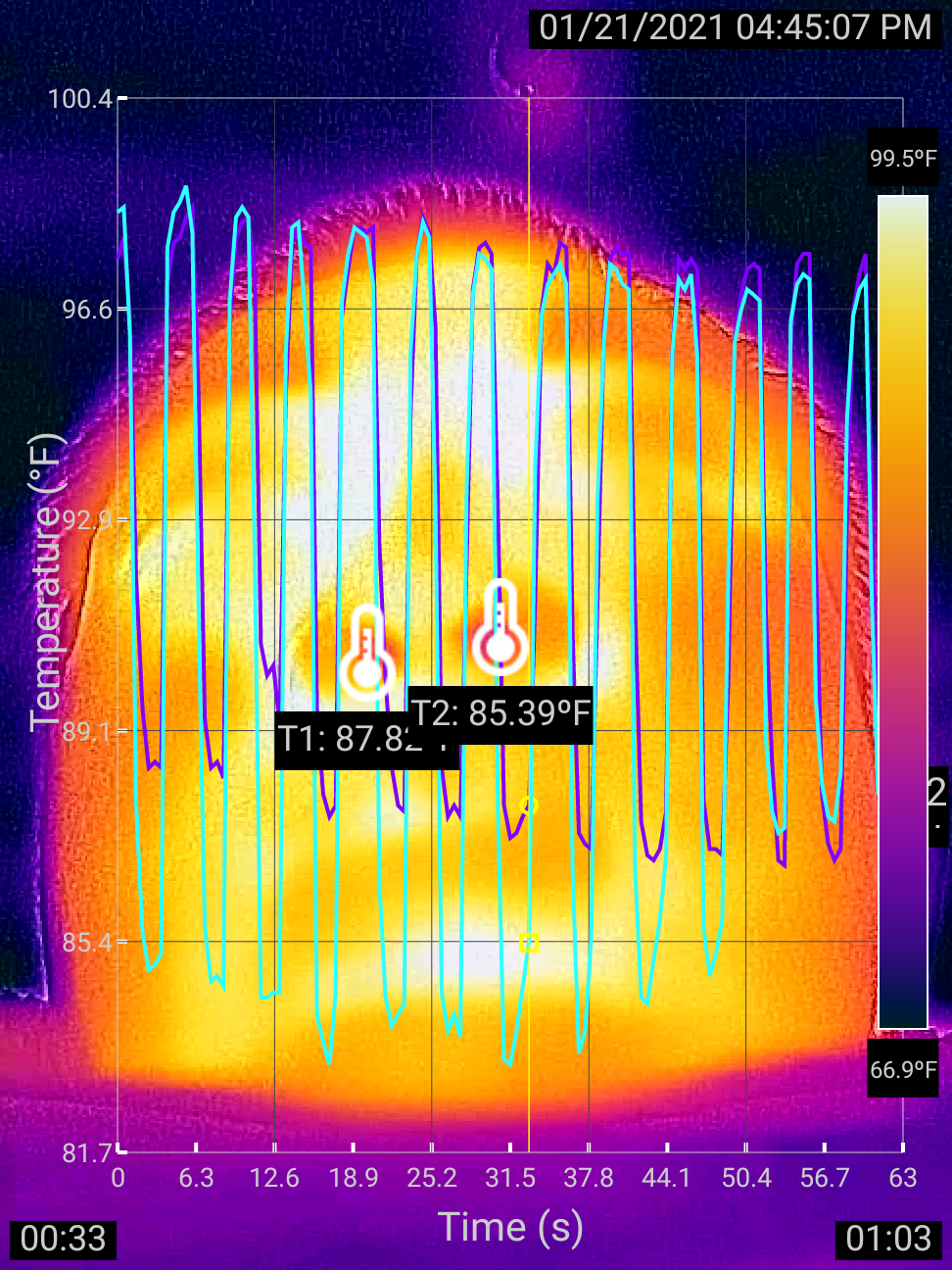 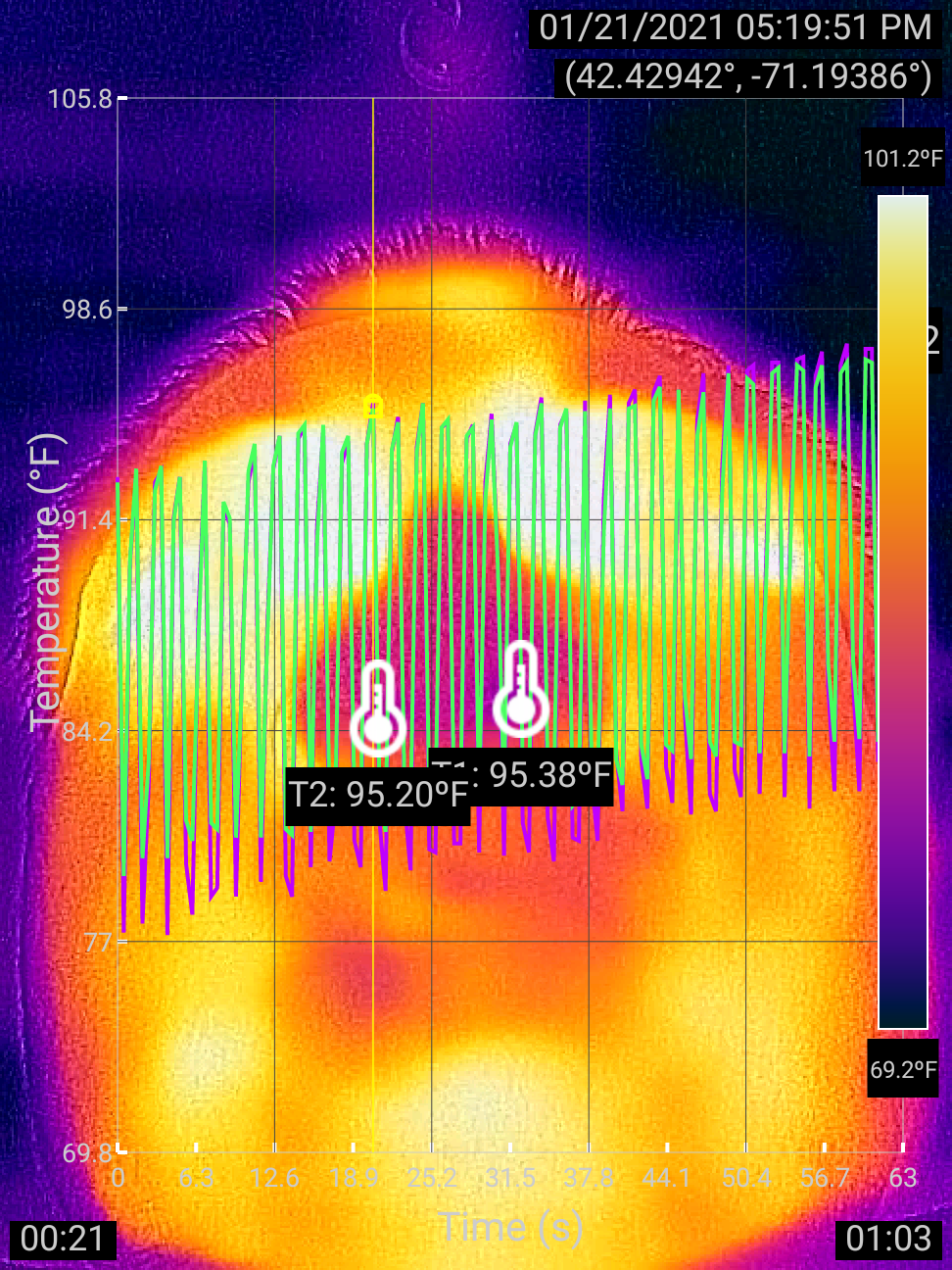 Comparison of the temperature fluctuations of the two nostrils of an adult before and after exercise. Image credit: Xudong Huang

The temperature curves of the two nostrils in both cases were synced and exhibited similar amplitudes of fluctuation, further proving the validity of our data.

Compared with the case before exercise, the temperature graph after shows a rising trend. Was this caused by the increasing of the human body temperature as a result of exercise? Or was it caused by the warm air from a heating system? We cannot rule out the latter possibility, since this observation was carried out in the winter inside a heated house. To investigate this question, we just need to add two more thermometers to show the changes of the highest and lowest temperatures in the view. 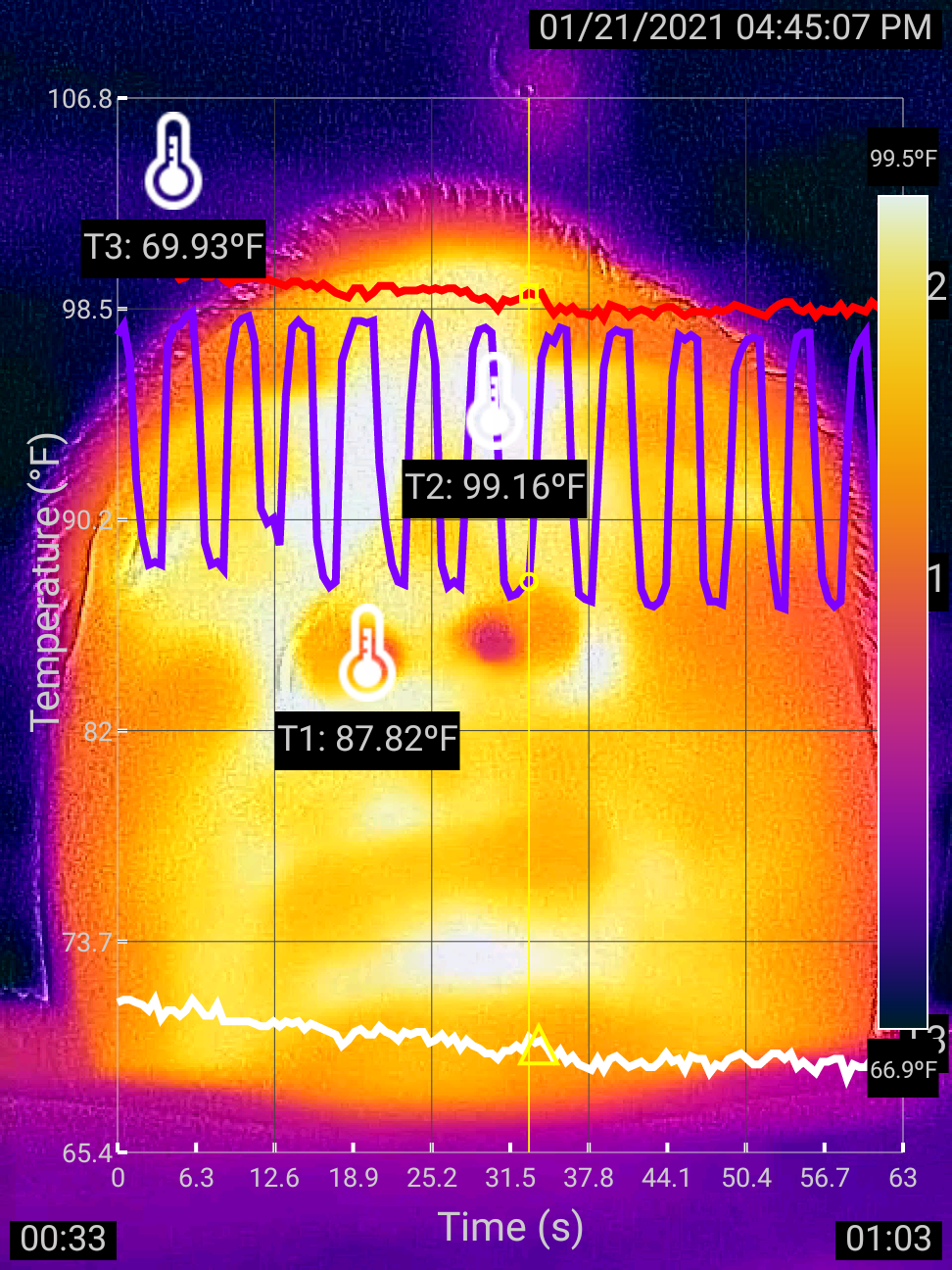 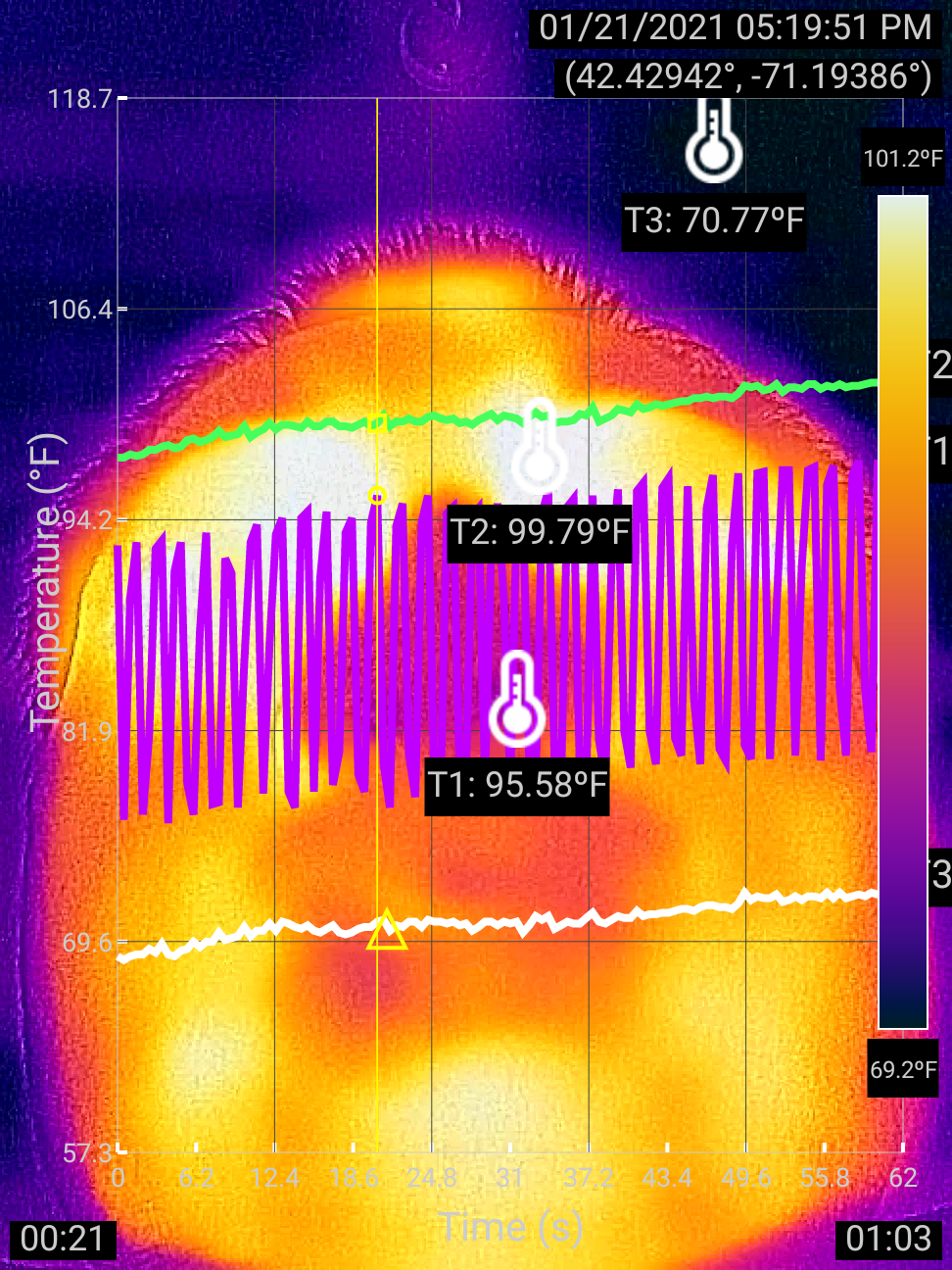 Comparison of the temperature changes of a nostril, the eye area, and the ambient before and after exercise. Image credit: Xudong Huang

The result of the thermometer T3, which is used to measure the ambient temperature, also shows an upward trend in the case after exercise. This suggests that the rising of the average temperature of the nostrils might have been caused by the rising of the ambient temperature, rather than a possible increase of the body heat. This seems to be consistent with the case before exercise, which shows a slightly downward trend of all the three thermometers. Based on this evidence, we conclude that the average temperatures of the nostrils as seen by the thermal camera are primarily determined by the air temperature.